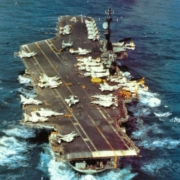 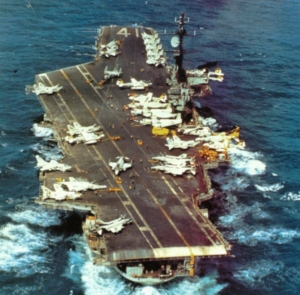 This weekend was busy, as usual, but really great, too. It started off with Yan and me picking the kids up from Camp Shi’ini during their lunch break, dropping Ella off in Silver Lake to have a sleep over with her cousin, Erin, and then heading down to San Diego. First of all, the days of the 2-hour drive to San Diego appear to be over. It took us twice that long to get down there Friday afternoon (and almost as long again coming back Saturday afternoon). But once we arrived – Cade and I for an overnight adventure on the USS Midway with his cub scout pack and Yan for an overnight adventure at a Gas Lamp District hotel with some of the other cub scout moms – the fun really got going.

We went aboard the giant aircraft carrier after it had closed to the general public for the day. We were given a safety briefing and orientation, and extensive “behind the scenes” tours into areas of the ship we weren’t allowed to go into when Cade, his grandfather, and I spent a day on the ship a year or so ago. The tour guides were mostly retired or active duty service members – many of whom had served on the Midway – and full of knowledge and stories. For dinner we went through the chow line on the mess deck. We then got to explore the ship on our own for a bit before settling in to the enlisted men’s berths (much like coffins stacked one on top of each other) for a short, claustrophobic night’s sleep.

Reveille sounded at 6 am promptly followed by breakfast (more navy chow – not quite the mimosas and omelet station I just knew Yan was enjoying). We toured even more of the ship and then got into the flight simulator to experience a dogfight. Cade and I were together and worked as a team, one of us as pilot and the other as gunner. We were shot down multiple times without ever bringing down one of the bad guys. But after being tossed around, turned upside down, and shaken up for three or four minutes in the simulator, we were both ready and willing to give someone else a try.

After reassembling the family back in LA Saturday night, I was able to get a good night sleep. Sunday Yan and I dropped the kids off at Kids Club so we could spent the day cleaning and touch-up painting one of our units in Echo Park in order to turn the keys over to a new tenant that afternoon. It was hard but satisfying work and we were both really impressed with how great the apartment looked when we were done with it. We walked down the street for dinner and drinks at The Holloway (just in case we needed to be reminded we were the least hip people in Echo Park last evening) before picking up the kids and heading home.

I loved my experience on the Midway with Cade. The slogan the cadre kept repeating to the scouts was, “freedom isn’t free” and I believe that’s an important lesson, even for youngsters. Cade had a great time and I hope it’s a memory he’ll cherish, as I certainly will. Then I loved working on that apartment with Yan. What we’ve built – and are continuing to build – together amazes me. We’ve both said creating our small portfolio of income properties is probably something neither of us would have tackled on our own, but through each other and with each other we’ve done it. As investments go, we feel like we’ve got something special which will become part of the legacy we leave for our children… as will memories of an overnight outing on one of the most powerful warships of its day… as will everything else we do with and for each other as a family. And that’s really what it’s all about.

Kelly Clarkson Starts Blended Family: What She Needs to Consider

Even Celebrities Like Queen Latifah Act as Caregivers for Their Aging Paren...
Scroll to top