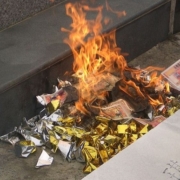 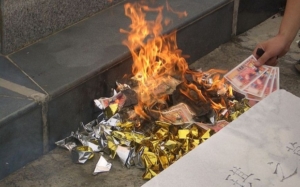 My wife’s paternal grandmother died last week and the funeral was held Friday. The funeral director conducted the service in Chinese so I didn’t understand much of what was being said, but there were obvious similarities – as well as striking differences – when compared to the traditional “western style” funerals I’m more familiar with.

First, the similarities. Black is the color of choice for those attending the funeral. There is a formal viewing (though it takes place in groups based on relationship to the decedent). There is a separate funeral, funeral procession, and graveside service. It is a time of mourning and sadness, and an opportunity to show respects and say goodbyes.

The stark differences between a Chinese funeral and its western counterpart are fascinating, as are most of the differences between the cultures. In a general sense, I would describe a Chinese funeral as, “lots of bowing, lots of chanting, lots of ritual.” The funeral director led the intricate, formal procedures with the deft hand of an orchestra conductor. There was lots of choreography going on throughout, with various groupings of descendants standing up, sitting down, lighting incense, and bowing (lots and lots of bowing), all at any given time.

Spiritualism was mixed with materialism as we were each told to pick up and hold play money, fake gold and jewelry, model houses and cars, replica cell phones, and even dolls representing servants as we bowed before the casket. Then we were marched outside to burn all these items – in a very specific order – in a huge fire as is custom, to send off the departed with tokens of wealth. Tradition holds that items burned at the funeral (and also at the annual day of the dead) make their way to the underworld and provide comfort and status to the burners’ departed ancestors.

As intellectually interesting as I found the whole affair, it still had a very real, human impact for me, too. Yan’s grandmother did not speak English so I would always say hello to her and attempt a bit of chit chat in my broken Chinese at family gatherings. She never ceased to be tickled by my efforts and so we related to each other in a light, playful manner which I will miss. And I felt the grief barely contained in my normally stoic father-in-law. When I offered him my condolences at the funeral he gave me an awkward sort of half-hug which came from genuine vulnerability. And from a man who does not publicly show affection to anyone outside of his grandchildren, it was easily the most intimate connection we’ve ever shared.

It was also my children’s first experience with the death of someone they knew. It was an up close and personal, literal, front row seat to the circle of life. They asked lots of questions, some of which I wasn’t able to answer. But I hope I was able to help give them some level of comfort with, and take away some of their fear of, the concept of death.

Guiding Our Children Through Success AND Failure

Signing Up for Medicare: Important Facts for Those Nearing Age 65
Scroll to top