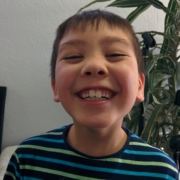 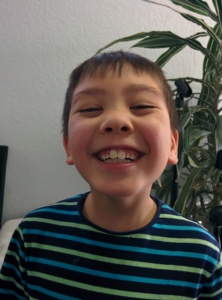 Imagine our surprise as Yan and I returned from vacation to find a letter from the school district saying Cade had been accepted into the GATE (Gifted and Talented Education) Program for PUSD. We were surprised NOT because we didn’t think Cade was qualified – from an early age it was obvious he was highly intelligent and we’ve always been awed by the way in which his mind works. No, we were surprised because we never expected Cade to actually participate in the test intended to identify gifted kids, administered by the school district.

We knew they were testing 2nd graders for the GATE program sometime near the end of the school year but we didn’t really put much thought into it. One of our many struggles with Cade scholastically is that he doesn’t much care for tests and so, more often than not, he simply refuses to take them. We assumed that would happen with the GATE test and quite frankly, we were much more concerned with getting him to sit for, focus on, and actually participate in his regular classroom tests.

Because it wasn’t really on our radar, we didn’t learn until after the results began being released just how big a deal GATE is in the Field Elementary School parent community. Everybody seemed to be asking everybody else if their kid got in (and we still didn’t know Cade had been accepted so our response was always, “Nope, did yours?”) Only at that point did we become aware that many kids had been studying for the test for quite some time; something we didn’t even know was possible. And there were some parents who were even disappointed their child didn’t get into GATE. We weren’t disappointed, but then again we never had the expectation Cade would be accepted.

After we got the results, however, I felt my pride swell at Cade’s accomplishment. The school district had officially recognized what I had known all along: Cade is indeed gifted. I have made no secret of the fact that Cade also has a sensory processing disorder which has made learning to read and write incredibly hard for him (and made it incredibly hard for his teachers to see his potential, too, as Cade routinely refuses to do his work in school). I am gratified that he was willing to participate in, and able to succeed on, the GATE test. And I am elated my brilliant little boy who suffers from an immense lack of self-confidence, largely due to his learning disorder, now has some independent validation that he’s not “the dumbest kid in class” as he so often feels and verbalizes.

Pride is a funny thing. I’m sure I wouldn’t have felt ‘less’ proud of Cade had he never been accepted into GATE. Yet I’m filled with pride that he was. Hmmm. And pride is powerful, too. I feel it in my core. I see it manifested in others. I believe parental pride stems from our desire to support our children to be their best selves and is a natural part of parenthood. But if not channeled with caution, I fear it may lead to unreasonable expectations for our children or manifest itself within them as feelings of being a disappointment to us. As such, parental pride is a bit of a tightrope to straddle, but one it seems, is nearly impossible to avoid. I’ll have to tread carefully here.

Signing Up for Medicare: Important Facts for Those Nearing Age 65

Life Is Multifaceted: Teach Children to Be Open to All of Its Complexities
Scroll to top