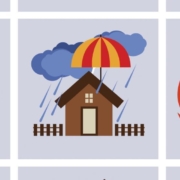 The recent wildfires in California were devastating to the communities and families affected by them. The threat of earthquake is always present for those of us in the Golden State. Yet despite the danger posed by natural disasters, many California homeowners still lack the insurance needed to protect their property and possessions from such catastrophes.

In fact, roughly two-thirds of all homeowners are underinsured for natural disasters, according to United Policyholders (UP), a nonprofit organization for insurance consumers. One contributing factor to this lack of coverage is the mistaken belief that homeowners insurance offers protection from such calamities. In reality, natural disasters are typically not covered by standard homeowners policies.

In order to obtain protection, you often need to purchase separate policies that cover specific types of natural disasters. Here, we’ve highlighted the types of insurance coverage available and how the policies work.

While homeowners insurance typically doesn’t pay for damage caused by natural disasters, most policies do protect against fire damage, including wildfires like the recent ones in California. The only instances of fire damage homeowners policies won’t cover are fires caused by arson or when fire destroys a home that’s been vacant for at least 30 days when the fire occurred.

That said, not all homeowners policies are created equal, so you should check your policy to make certain that it includes enough coverage to do three things: replace your home’s structure, replace your belongings, and cover your living expenses while your home is being repaired, known as “loss of use” coverage.

In certain areas that are extremely high-risk for wildfires, it  can be be difficult to find a company to insure your home. In such cases, you should look into California’s FAIR Plan.

Unlike fires, earthquakes are typically not covered by homeowners policies. To protect your home against quakes, you’ll need a freestanding earthquake insurance policy.

While earthquake insurance is available throughout the state, policies in high-risk areas (such as on fault lines) typically come with high deductibles. What’s more, though earthquake insurance covers damage directly caused by the quake, some related damages such as flooding are likely not covered. Carefully review your policy to see what’s included—and what’s not.

The threat from flooding is so widespread, Congress created the National Flood Insurance Program (NFIP) in 1968, which allows homeowners in flood-prone areas to purchase flood insurance backed by the U.S. government. To determine the risk for your property, consult FEMA’s Flood Map service center.

Get the disaster coverage you need today
To make certain you have the necessary insurance coverage to protect your home and belongings from natural disasters, consult with your insurance agent or let us know and we’ll be happy to refer you to one of the trusted insurance advisors we know.

How to Include Your Digital Assets In Your Estate Plan

Saving What Matters: 12 Must-Have Items To Pack in Your Go-Bag
Scroll to top