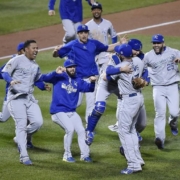 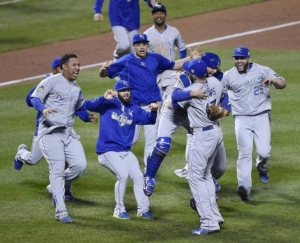 I grew up in Wichita, Kansas. I played little league baseball there (with my dad as my team’s coach). And I spent many a summer day out at the municipal ballpark watching the Wichita Aeros, a triple-A farm club for the Cubs and Expos. So baseball was a part of my life – a big part, in fact – from early on.

The Kansas City Royals were the closest major league team to Wichita and we would take a family trip up to Kauffman Stadium (called Royals Stadium back in those days) once a year to watch the Royals play. I also remember my father buying me a clock radio and letting me fall asleep to the radio at night – as long as I was listening to a Royals game. I’m not kidding.

I moved to Kansas City, Missouri in my early twenties. During the ten years I lived there I was at the stadium for the Royals’ home opener exactly ten times. I never missed it. I was also at the park for a handful of other games each and every season. In short, I’ve been a Royals fan my whole life.

As you might imagine, I am ecstatic about them winning the World Series over the weekend. But most of all, I am impressed and inspired by just how resilient the Royals were this series, this post-season, and this year in general. After losing a heartbreaker in game seven of the World Series last season, the Royals came back to win it all this year. After being down late, in seemingly countless games this post season, they hung in there, never gave up, and found a way to come back and win most of them.

So, yes. I’m thrilled they won. But what makes me really proud as a Royals fan, and what I hope my kids remember about the 2015 Royals, is that they – as much as any team ever has – embodied the spirit of “never quit.” They could have hung their heads low and felt sorry for themselves after game seven last year. They could have played the blame game and been the victim at many points during this season. They could have packed it in and waited for next time during several of the playoff games they were just a few outs away from losing.

But they never did quit. Not for a moment; not a single member of that team. And they ended up coming back and winning most of the games they were on the verge of losing. And because of that resilience and determination, they are now world champions. I hope my children get that as the real take away message from this World Series and apply that lesson to their lives. Because that IS life. That’s what it’s really all about: not quitting, no matter what – in sports, in business, in marriage, in parenting, in everything. In life, winning is really just about not quitting.

A Gift to Your Family and the Environment: Green Burial

How to Raise Responsible Kids – Part 1
Scroll to top