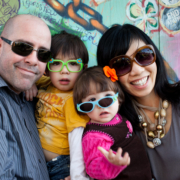 I spent yesterday morning sitting through an entire session of the Edmund D. Edelman Children’s Court in Monterrey Park. I was there to advocate for my kid — no, not Cade or Ella, but the child assigned to me once I completed my training as a Court Appointed Special Advocate (“CASA”). I have been with him for 2-1/2 years now. He is in “the system” because his parents abused, neglected, and ultimately abandoned him.

He’s bounced around between several group homes during our time together and unfortunately, yesterday in court he got bounced again. Why am I writing about this? Well it’s what’s on my mind and in my heart as I sit to put together my weekly email. I feel a bit depressed after being there all morning (our case was called last), hearing sad story after sad story, and seeing the children who – through no fault of their own – are the leading characters in those stories.

There are some 30,000 kids in they system in Los Angeles county alone. The system is overburdened, under funded, cold, and ugly. It’s no place for a child. Now don’t get me wrong. Some of the greatest people in the world work within the system (my kid’s social worker comes to mind). But there’s just not enough of them nor enough resources to make up for the unfair hand these kids got dealt.

So if you have children of your own, I implore you make sure they are never at risk of being placed in the system – not even for a moment. Accomplishing that is actually quite easy. Simply name long-term AND short-term legal guardians for them. If you think it’s worth taking a chance on your kids being placed in the system, even temporarily, go down and watch a session at the courthouse. Then tell me it’s worth the gamble. Better yet, tell them it’s worth the gamble.

Is it Possible to Inherit Debt?

Learn From the Estate Planning Mistakes of Others
Scroll to top