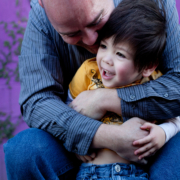 One of Cade’s friends had a laser tag party for his 7th birthday last Saturday. Cade was super excited to attend. For the first game of laser tag, the group of about 20 kids divided themselves up into fairly even teams. Extremely amped up and enthusiastic after the first battle, they gobbled down some pizza and then went back into the prep area to suit up for a second game.

Cade, however, quickly became inconsolable and through his sobs, lamented the unfairness of the circumstances. When I suggested he join the blue team too, Cade shook his head angrily and said, “That doesn’t make any sense… then there’d be NOBODY for the ‘blue’ team to play against!” Obviously he was not only upset about the inequity between the teams, but also by the dilemma presented by the situation. And I completely understood.

Well, he stuck to his guns, my son, and suited up as the sole red warrior; solemnly heading into battle; vastly outnumbered by the blue team. When the “smoke had cleared” at the end of the game he had managed to calm himself down and even seemed to gain a small sense of pride in his heroic “last stand” effort against such a vastly superior force.

All this brought home just how much my boy is like me. He has an innate sense of justice and fairness within. He is willing to stand up for his principles, even if it means standing alone. I am so proud of him for that. I also know he’s going to have a tough road and many hard lessons ahead, learning which battles are worth fighting and which are not. The apple, as they say, doesn’t fall far from the tree.

As his father I want to impart the lessons I have learned (and truth be told, am still learning) so Cade’s journey might be a bit easier than mine. But ultimately he will have to make his own mistakes and find his own path. It will be hard to watch him stumble, as he surely will. But I believe in him and I know he will accomplish amazing things in his life. I guess I have to be content just being there to support and cheer for him along the way.

How to Avoid Probate by Properly Funding Your Trust

It takes a village
Scroll to top