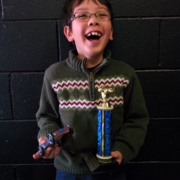 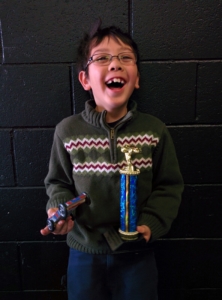 My kids are both amazing artists, each in their own right. Truth be told, I think all kids are. When I produced and directed an improvisational theater company in Kansas City, one of my favorite things was giving improv classes to kids. They just get it. I didn’t have to convince them to suspend their disbelief. I didn’t have to teach them the art – yes, it is an art – of acceptance on stage. It was never necessary to direct them into a sense of play. They were naturals. All of them, even the shy ones.

So I delight in watching my own kids develop their unique artistic natures. Ella’s is more “traditional”. She dances and sings, paints and draws. And she has a flair for all of these things which makes it easy to see the artist in her. What blows me away is that as a 6-year old, she varies her style of painting, from realism to abstract, depending on her mood – even if she doesn’t understand the nuances of it all yet. Yan and I were looking through several of the pictures she’d just brought home from her after school program when we found a particularly abstract, colorful, painting. Yan said to her, “that looks like a Picasso.” “No,” Ella replied, “it’s a giraffe.”

Cade on the other hand, exhibits his artistic side as a designer, engineer, master builder. The intricate lego structures he builds are absolutely amazing. I’ve gotten him some complicated “assembly required” toys that he blazes through putting together just using the pictures on the instruction sheet. And last weekend we finished his pinewood derby car. The big joke on at the event was about parents making the cars instead of the kids. But this was Cade’s project. We studied a little about aerodynamics and gravity together and then he went to work designing, building and painting his car. I vetoed his use of the power tools but other than that, he was in charge and I was a simple laborer just chipping in at his direction.

Last year, for his first pinewood derby, I took the lead. In fact, I pretty much did everything. We didn’t win in the racing category, but we did win the trophy for most original design. He was disappointed because he knew it wasn’t because of him. That made me disappointed too and I vowed that win or lose, this year the car would be as much his as possible (minus the power tools, of course). And guess what? His car won second place in the wolf division! I loved seeing the pride swell up in him because he knew the car was his own creation, not mine. A valuable lesson for me; a great sense of accomplishment for Cade.

I love art because it’s all about putting yourself out there, creating, expressing, accomplishing. And I love watching my kids each finding their own inner – and outer – artists.

Holiday Bonuses & Tax Refunds: Where to Put Them For Max Return
Scroll to top